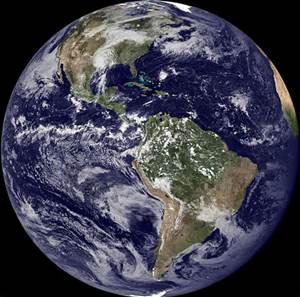 1. Earth is the only planet whose English name does not derive from Greek/Roman mythology. The name came from the word ‘erda’ which is an Anglo-Saxon word that means soil or ground.

2. The continents move every year by 2 centimeter distance.

3.An average humans fingernails grow at about the same rate Africa and South America are moving.

4.Among all the planet in solar system, Earth and Mercury are known to have densest compositions. This means their particles are closely packed together.

7. 3.5 billion years is the age of bacteria fossils found in Australia. This is the longer than earth’s atmosphere has had oxygen.

8.55 tones is the weight of earth’s largest crystal, found beneath Mexico’s Nazca silver mine.

11. Earth is the only planet in our solar system with plate tectonics.

12. 90% of all volcanic activity occurs in the oceans.

14.1 litter of sea water contains 13 billionths of a gram of gold.

15.Antarctica has as much ice as the Atlantic Ocean has water.

18. Earth is smoother than the bowling bowl.

19.China’s air pollution is visible from space not the Great Wall of China.